Simple chord-melody arrangements, which are notated in easy-to-understand tab, each of the 12 songs contains lyrics and chord diagrams. If you’re a vocalist who’d rather strum and sing Christmas songs to your friends and family, we’ve got you covered, too! 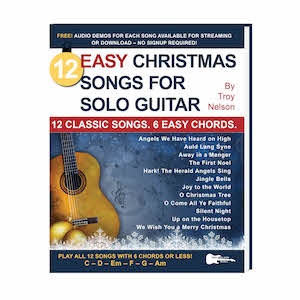 All music in 12 Easy Christmas Songs for Solo Guitar is presented in easy-to-follow popular tab format and fretboard diagrams so you’ll be able to quickly apply the material right to your guitar.

No complicated fingerstyle arrangements here! Instead, each song is arranged with the beginner in mind. Yet, even seasoned six-string vets will find the songs fun to play!

This Christmas book not only provides guitarists with simple chord-melody arrangements, but also lyrics, chord diagrams, and strum patterns so vocalists can strum and sing each song, as well.

Most Christmas songs on the market for guitar players are either highly technical fingerstyle or chord-melody arrangements, or just simple “lead sheets” with melody, lyrics, and chords. Sadly, there’s just not much in between, which is where most guitar players reside.

While I’d certainly love to learn an intricate fingerstyle arrangement of “O Come All Ye Faithful,” and I did study jazz chord melody in college, the problem is finding enough time to woodshed these types of arrangements. After all, we guitarists are busy people. We have work, family, and other obligations occupying most of our time, so we want something that we can jump into and learn quickly. And that’s where 12 Easy Christmas Songs for Solo Guitar comes in. It fills the void between too easy and too hard.

Each song is arranged in simple chord-melody style. If you’re unfamiliar, chord melody is simply an arrangement that includes both the melody and the harmony (chords), enabling the guitarist to play solo or in a setting that lacks another melody/harmony instrument, such as a drum/bass/guitar trio. More specifically, the melody and chords are played at the same time. The chords generally appear on the same beat of each measure—for example, on beats 1 and 3 in 4/4 time—while the melody is played on top. This means chords are often altered a bit in order to play the melody note on the top string of the chord voicing.

Chord melody is synonymous with jazz, but in lieu of the more sophisticated extended and altered chords of that genre, the arrangements in this book are limited to common open chords. In fact, most songs contain no more than three or four chords. And here’s the best part: you need to know just six chords—C, D, Em, F, G, and Am—to play all 12 songs!

As mentioned in the introduction, the songs in this book are presented in both chord diagrams and in tab. In this section, we’re going to go over each format so you’ll be able to quickly apply the music to your instrument. Let’s start with chord diagrams.

A chord diagram, or chord frame, is simply a graphical representation of a small section (usually four or five frets) of the guitar neck, or fretboard. Vertical lines represent the guitar’s six strings, horizontal lines represent frets, and black dots indicate where your fingers should be placed. Although a bit counterintuitive, chord diagrams are presented as though you’re looking at the neck while the guitar is held vertically in front of you, rather than from a more natural horizontal position. Nevertheless, chord frames are a good way to quickly understand how a chord should be “voiced,” or fingered.

A thick, black horizontal line at the top of the diagram indicates the guitar’s nut (the plastic-like string-spacer at the end of the fretboard). When this is present, the chord typically incorporates one or more open strings, which are represented by hollow circles above the frame. Conversely, when an open string is not to be played, an “X” will appear above the frame.

TIP: In measures 5–6 and 13–14 of the chorus, keep your index finger barred across strings 1–2 as you shift your middle and ring fingers to change from the F chord to the C chord. That way, the index finger will be in position to play the F melody note (fret 1, string 1) on beat 1 of the C-chord measure and no extraneous finger-shifting will be required.

WATCH OUT FOR: The high A note (fret 5, string 1) in measure 15 of the verse. You’ll want to voice this note, as well as the G note (fret 3) that follows, with your pinky, which will put your other fingers in an advantageous position for the subsequent G7 chord (beat 3). In fact, you’ll want to use the alternate voicing for the G chord (shown in the introduction) in measure 14, as well, and use your pinky for all of the notes along string 1 that precede the G7 chord.

Free Audio Downloads or Streaming with every book

Authors available to answer questions as you learn! Just Email us!